Festivals of Bhutan are an explosion of colour, local culture, and folklore. Chants, masked dances, fire wielding monks, cymbals and local life galore. People from all over the world, plan their travels to coincide with these extravagant festivals and locals from all over Bhutan make their way to these festivals. The plus side is that you get to see local life from close up, but  the flip side being that  places to stay get booked out months in advance. Win some, lose some. But the upside of experiencing these festivals firsthand is the greatest gift! Here are the top 6 festivals of Bhutan, that you could factor in, on your trip to the land of happiness, Bhutan.

Tshechu: Literally means “tenth day”, it’s a religious festival celebrated in every district of Bhutan. The festivals are preceded by days and nights of prayers to invoke the Gods and are celebrated in honour of Guru Rinpoche, who is responsible for bringing Buddhism to Bhutan.

Thimpu Tshechu: The largest festival in all of Bhutan is this celebration in the capital city, in the Thimpu Tashi Dzong. The balconies of the Dzong offer spectacular views of the festival and the locals come from faraway places in their Gho’s and Khira’s to witness the masked dances and the chants.

Also check: 5 Beautiful stays in Ladakh that will steal your heart 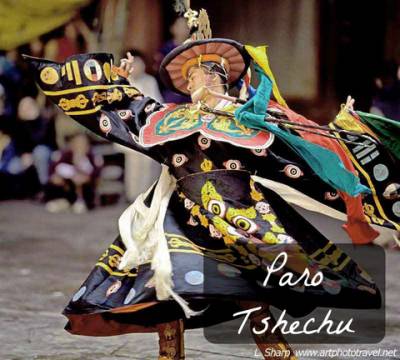 Paro Tshechu: The five-day Paro Tsechu is held each spring, from the 11th to the 15th day of the second month of the Bhutanese calendar – usually late March to April. The highlight of the festival is the giant Thangka which is taken across town and  displayed before dawn, and has the teachings of the Guru. The Black Hat Dance and the  ‘Dance of the Lord of Death and his Consort’.

Bumthang Tshechu: Also called the Jambay Lhakhang Drup, is conducted in the dzong. The highlight is the flaming fire dance, which is conducted on some dry grass and this festival also hosts the Dance of Treasure, where monks and masked dancers perform this naked.

Punakha Drubchen: A unique festival  It is about recreation of some consequential scenes and moments from the Tibetan Army battle of 17th Century. The local military officials recreate and re-enact the scenes dressed in full battle gear complete with swords. It is to celebrate the victory and to pay tribute to the villagers who came forward to drive out the Tibetan army out of their country. It shows gratitude to these people because of whom, Tibet was unable to take over Bhutan.

The Punakha Tshechu follows immediately, which is known for its colorful dance performances and cheerful environment.

Also check: Top 13 most unique hotels from around the world 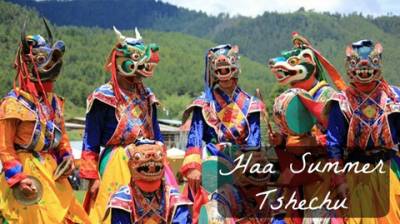 Haa Summer Tshechu: Introduced quite recently in 1990, it is dedicated to the nomads of the region. Some of the most consequential moments and cultures of these nomads are showcased during this festival in the form of vibrant pictures and lively paintings. The best part is that even tourists can participate in some of the fun activities like yak riding, folk dance, and food tasting.

Wangdue Phodrang Tshechu:  Wangdue, in central Bhutan as a region, is well known for its songs of folklore called Lozeys or ornamental speeches. The Tshechu is known for the Raksha Mangcham or the Dance of the Ox. It concludes with the unfurling of the Guru Tshengye Thongdrol where people throng to receive blessings.The Wangdue Dzong was burnt to the ground in 2012, so the festival takes place in the nearby army ground.

Also check: 12 Amazing restaurants around the world with the best views

The Blueberry Trails not only specialises in curating honeymoon packages, but also various trips for family and friends, including personalised Europe Holiday packages.

You can write to us at This email address is being protected from spambots. You need JavaScript enabled to view it. or reach us at 8080 122 441 to customise your Bhutan Holiday.